One of the biggest challenges that the world faces today in terms of safety and security is that found for the individual on the internet. There are plenty of different businesses and stores that permeate the worldwide web, to the point that no system online can track each of the thousands being set up every day anymore. It can extremely difficult to know for sure whether a site can be trusted or not. Online pharmacies, especially, are businesses that can make a lot of money from shipping the medications that people need all over the world. What does a store like One Step Pharma have to offer for its customer?

One of Several Negative Reviews on One Step Pharma

The answer to this question is ‘not much’, apparently, as there doesn’t seem to be any existing site connected to One Step Pharma anymore. Even if you try to type in onesteppharma.net, you’ll only get a message saying they couldn’t find the server. This often means that the site has since been taken down, and the reasons were probably more justifiable than anything. If you had once come across One Step Pharma when it was still kicking, you may have found out that they were selling narcotics and other restricted medications on their site, such as Adderall, Codeine, and Percocet, which is a huge red flag for a pharmacy especially if they do not ask for a proper prescription.

Warning against One Step Pharma

For most people, the company’s location was based in the USA, but that is where things started to get tricky, as some would claim they were in Washington, in the District of Columbia, while others were given the impression that operations were going on in California. Digging around for more information, many prior customers discovered that the site was based in a foreign country, with products coming from either the Philippines, the UAE, or Pakistan, depending on where their money was actually being routed. Many customers were outraged when they found out that they had been scammed out of their money. After they had placed the orders, there was no subsequent package that was sent to them.

One Step Pharma is one of a large number of internet pharmacies that have been shut down due to their illegal operations and unethical actions. While sadly these websites are less the exception and more of the norm online, they don’t represent all of the online pharmacies out there. In fact, there are many good ones that can be found and visited with enough help.

Reddit, a forum/discussion website that has hundreds of thousands of visitors and contributors every day, is a place where you can ask many ranging topics of questions and get an answer. Unfortunately, you won’t find any posts regarding One Step Pharma in particular unless you yourself post one up, but there have been many discussion on the legitimacy of online pharmacies. As a Reddit user once posted, the rules for buying medication online are very lax, and if you live in the US, they can be very strict in customs but still give leeway if you’re buying meds with a prescription and only for personal use.

Though there seemed to be a proper, legitimate website for One Step Pharma, you can never judge a book by its cover. The customer service providing instructions on how to order the medications, according to one previous customer, had been very helpful in guiding them through procedures, where to pay, and how to do so. However, as soon as the client had sent them the due amount, the pharmacy all but stopped responding to calls, and it dawned on these people that they had been swindled. If any pharmacy akin to One Step Pharma are claiming to be associated to it pops up, you know to stay well away.

Just like One Step Pharma, a website called WPills, with the same server address, has also been engaging in illegal activities. Visiting the website will yield you the image below, which states that they were given a warrant and have since been seized by the US court of law. The announcement even links the reader to an article relaying the dangers of buying pharmaceuticals online from unknown and untrustworthy vendors. 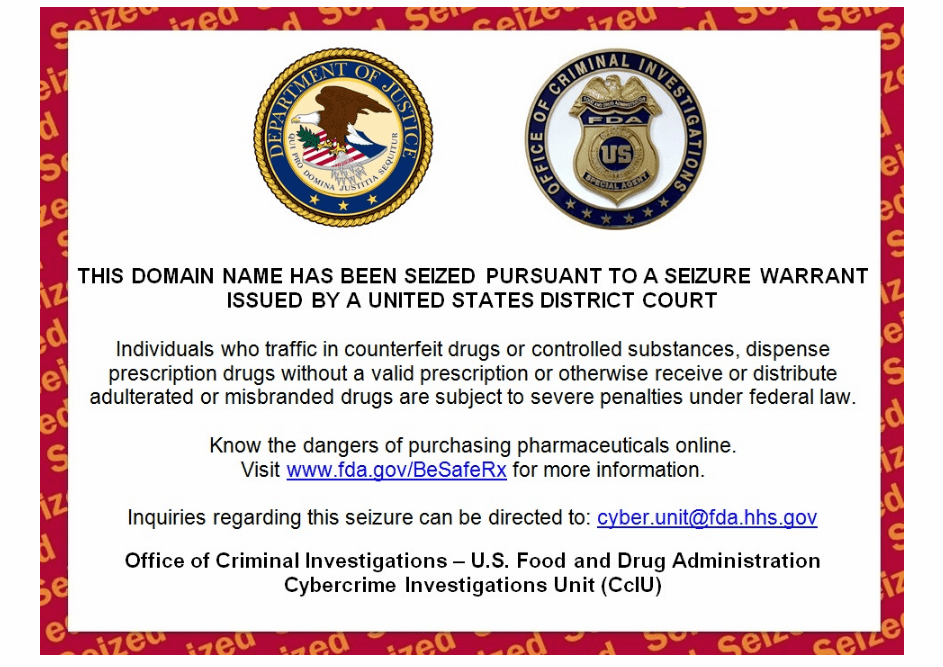 An Explanation to the Site’s Disappearance

Unfortunately, there isn’t any surefire way for the government to crack down on every existing illegal online pharmacy, especially when they’re based online. However, you can begin by protecting yourself with the right information. Along with the FDA, there are independent organizations out there that are working to validate online pharmacies by checking their credentials to see if they are operating legally. Some example of these would be the CIPA for Canadian-based online pharmacies, and the NBP which caters to a more American audience. You can even go on websites like eDrugSearch and Pharmacy Checker to see if they have been approved through a checklist of requirements.

While there are plenty of internet pharmacies out there, ranging from the reputed to the unreliable, but the unfortunate truth is that the great majority are unlicensed pharmacies that are able to make thousands of dollars in profits. Pharmacies such as One Step Pharma have been found to completely disregard the laws on selling medications by outright selling controlled substances without a prescription and then taking the cash payments without sending any actual products to the clients. This seems to also be the case for another pharmacy with the server address designated wpills.com, which has since been seized by the FDA Unit of the Office of Crime Investigations. Such businesses are prime examples of what to avoid when you’re ordering medications online.

If you want to find proper online pharmacies that are operating legitimately, you will need to use sources like the FDA and check out review websites like Pharmacy Checker that give you valid reasons to trust one website over another. Finally, you can always check out the recommendations list we’ve readied for online pharmacy customers here.